I've swum to Bat's Head before but always from Durdle Door so it was nice to get a new angle on it. Only a month to go before my Channel window opens and I decided it was time for an 8-hour duration swim. The last time I trained for the Channel I did my longest swim around 3 weeks before my attempt but I decided that was probably a bit too close this time. The problem is that when you put your body through something quite this extreme your immune system is a little depleted as you recover making you susceptible to colds and infections. So in planning an 8-hour swim a month out, I figured I should have plenty of time to recover properly before my Channel swim.

You can never guarantee sunshine in the UK but I had been expecting a swim on 10th June to be a reasonably warm affair. I think I can remember a glimmer of sunshine as we left the marina but that didn't last long. As soon as we were out of the harbour I jumped in and headed off towards Osmington Mills. Every time I looked down I saw lots and lots of large Barell Jellyfish and every time I looked up I saw my crew putting on another layer of clothing! Bobble hats and thermos flasks made an appearance as air temperatures struggled up to 11ºC.

As I approached Bat's Head we were met by one of the military firing range launches. The warden just reminding us that the sea danger area was closed east of Lulworth.  That was fine with us as we weren't planning to go that far. In any case, I can cope with cold, fatigue and jellyfish but I do draw the line at live shelling.

Bat's head is a chalk headland at the western end of Durdle Door Beach and has an arch which it's possible to swim through. In fact, in it's more of a tunnel so equally as exciting in swimming terms as its more famous limestone cousin at the other end of the beach.

I think I'd swum around 13km to get to the turn-around mark but it was a little less on the way home as we plotted a more direct course across the Bay. The return trip wasn't quite so much fun for me as I'd been experimenting with a new type of feed. It had tasted great on dry land and for the first few hours, but not so good between hours 5 to 7 and caused sickness. Still that's what training swims are for! I was happy to find this out ahead of time so I can now adjust and finalise my feeding plan for the actual Channel swim.

So apart from feeling really cold for 8 hours, getting cramp and sickness, this was a fantastic swim! Such a beautiful coastline to have the privilege of swimming along. 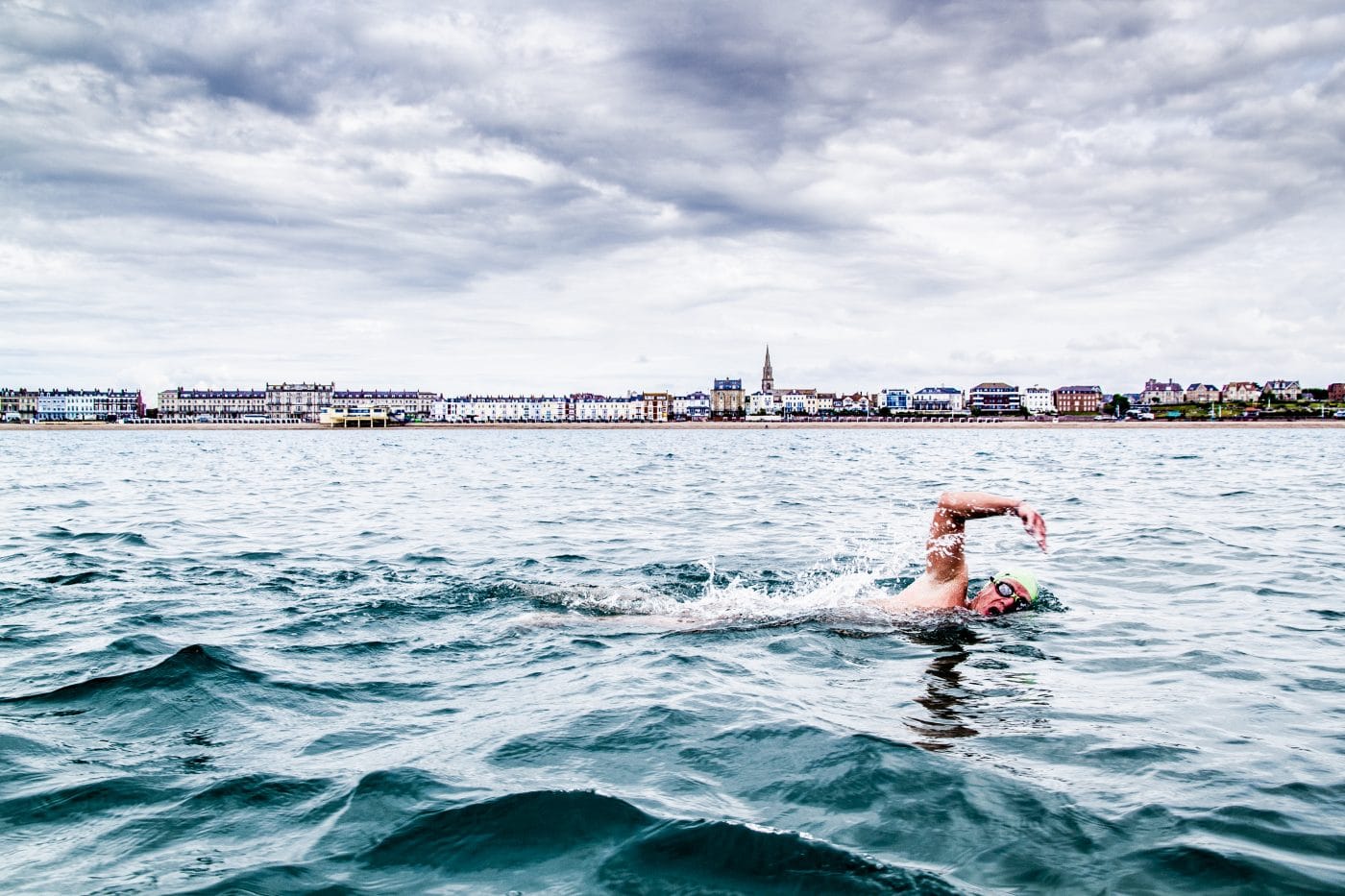 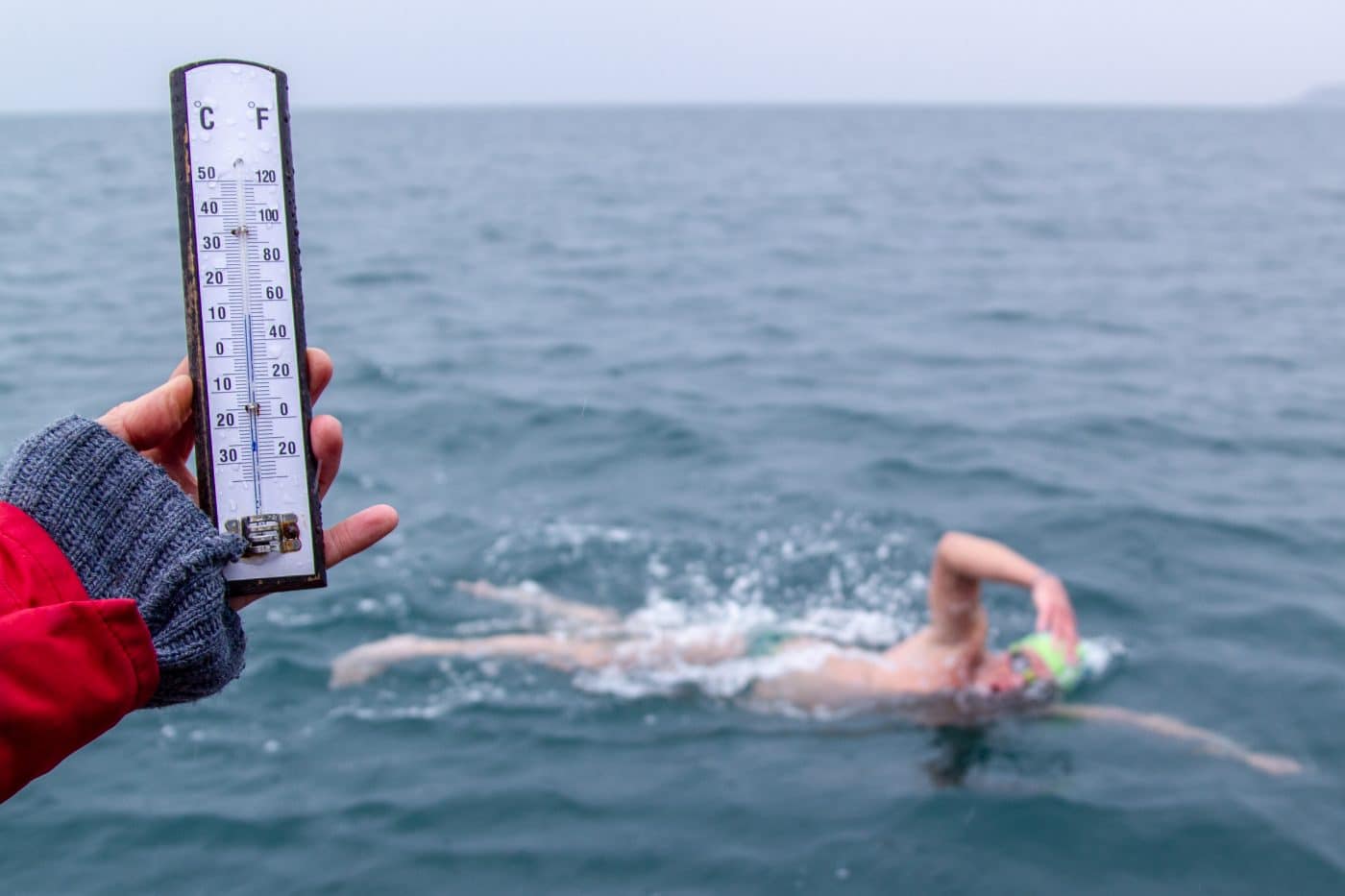 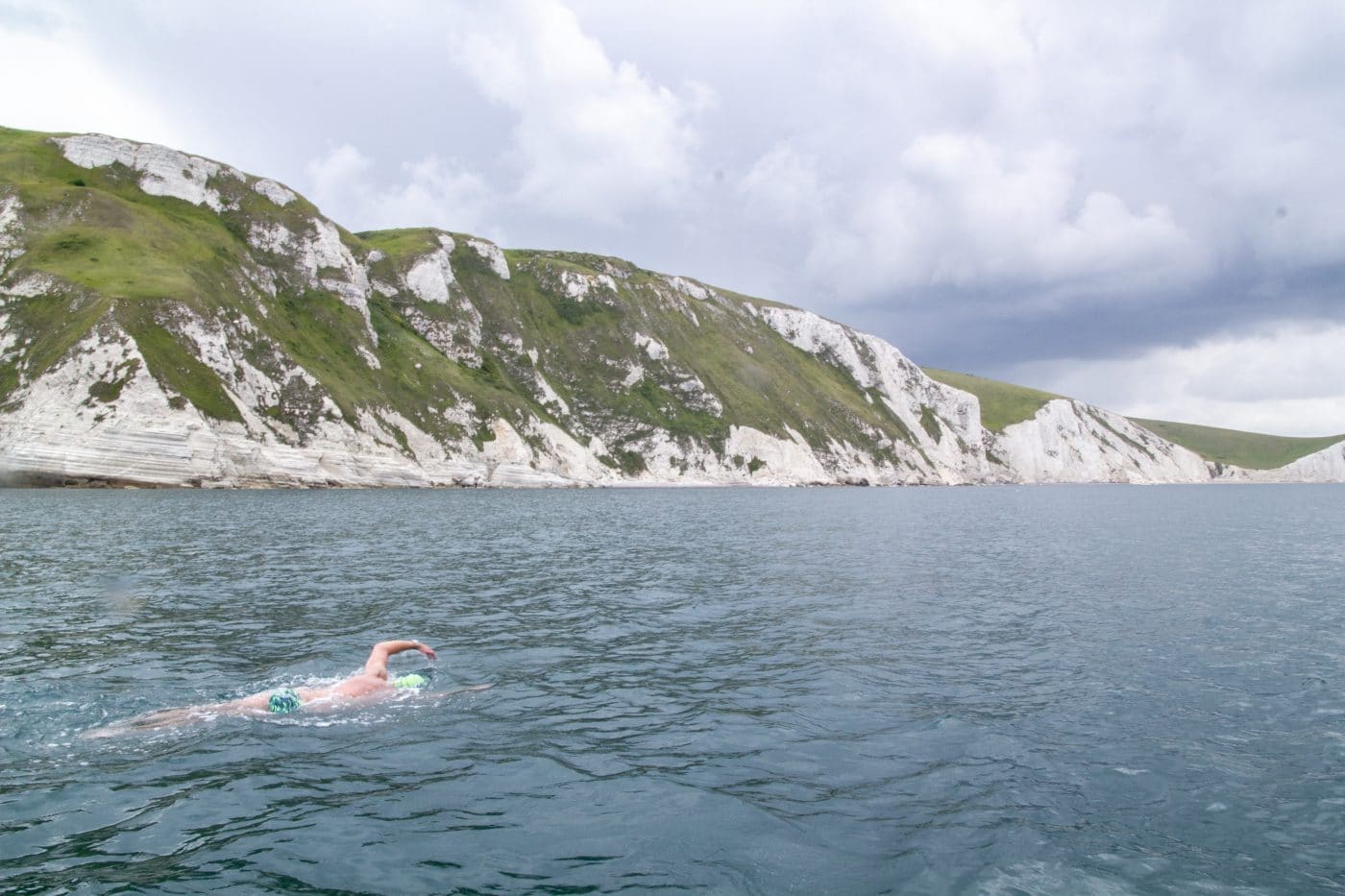 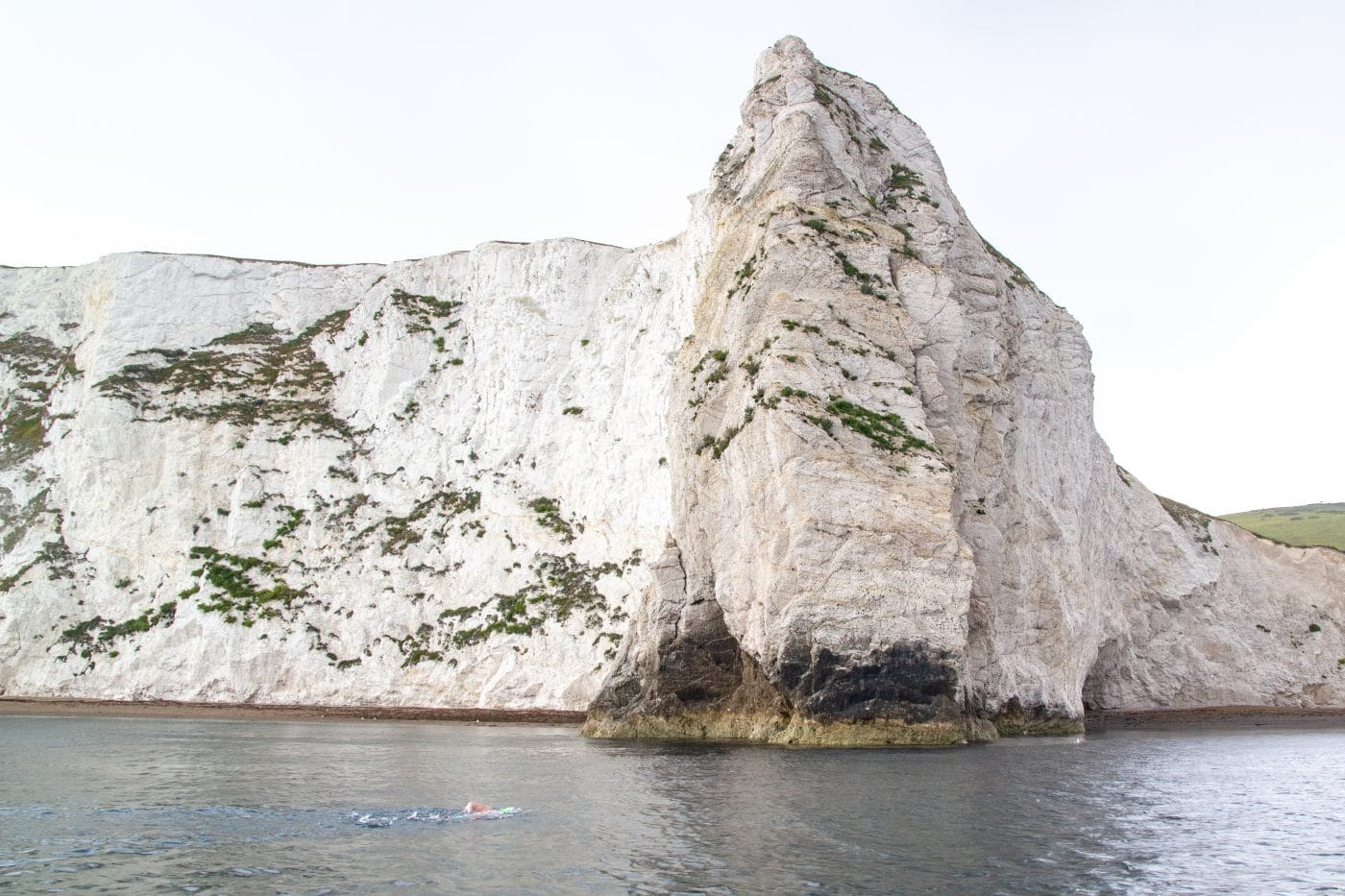 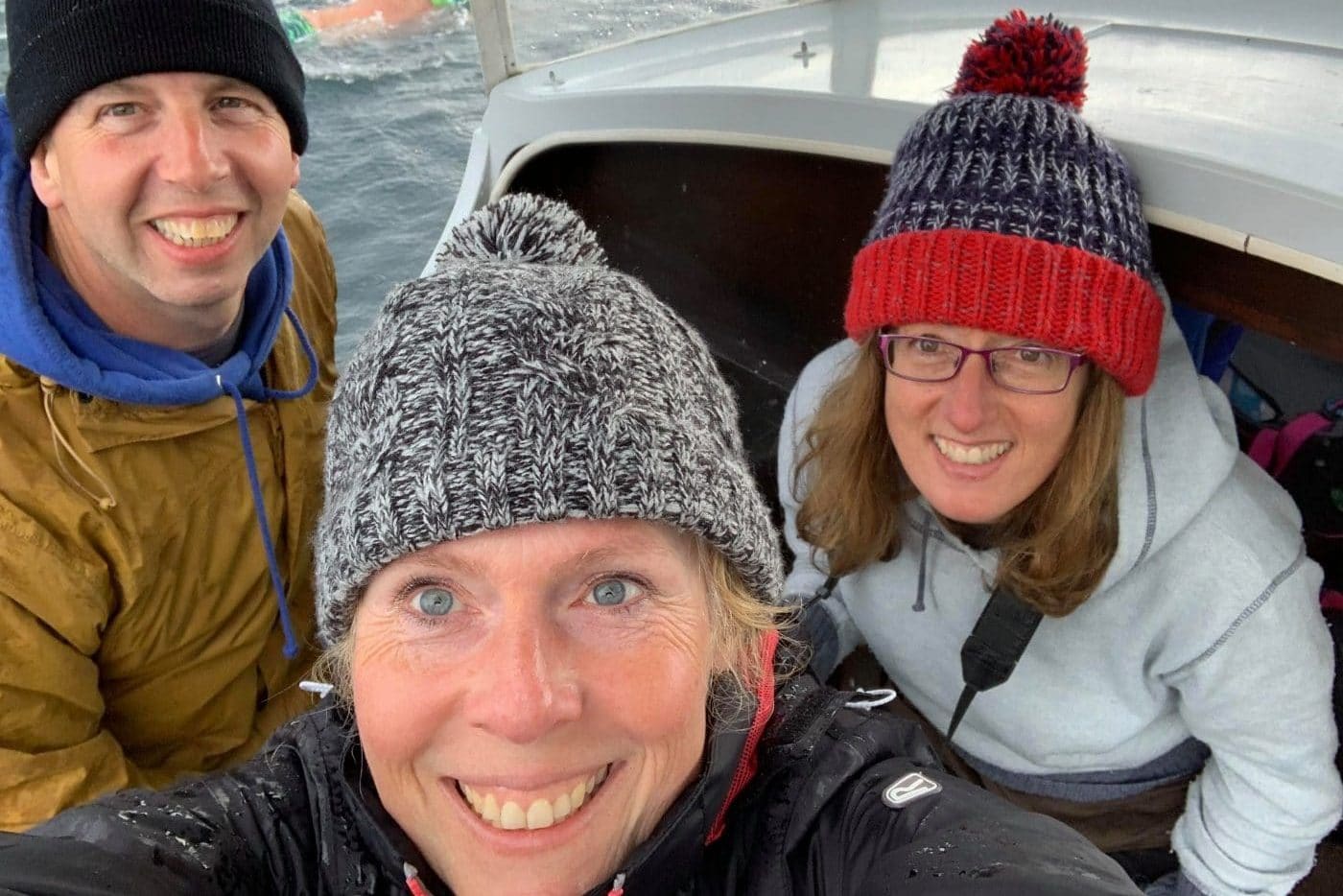 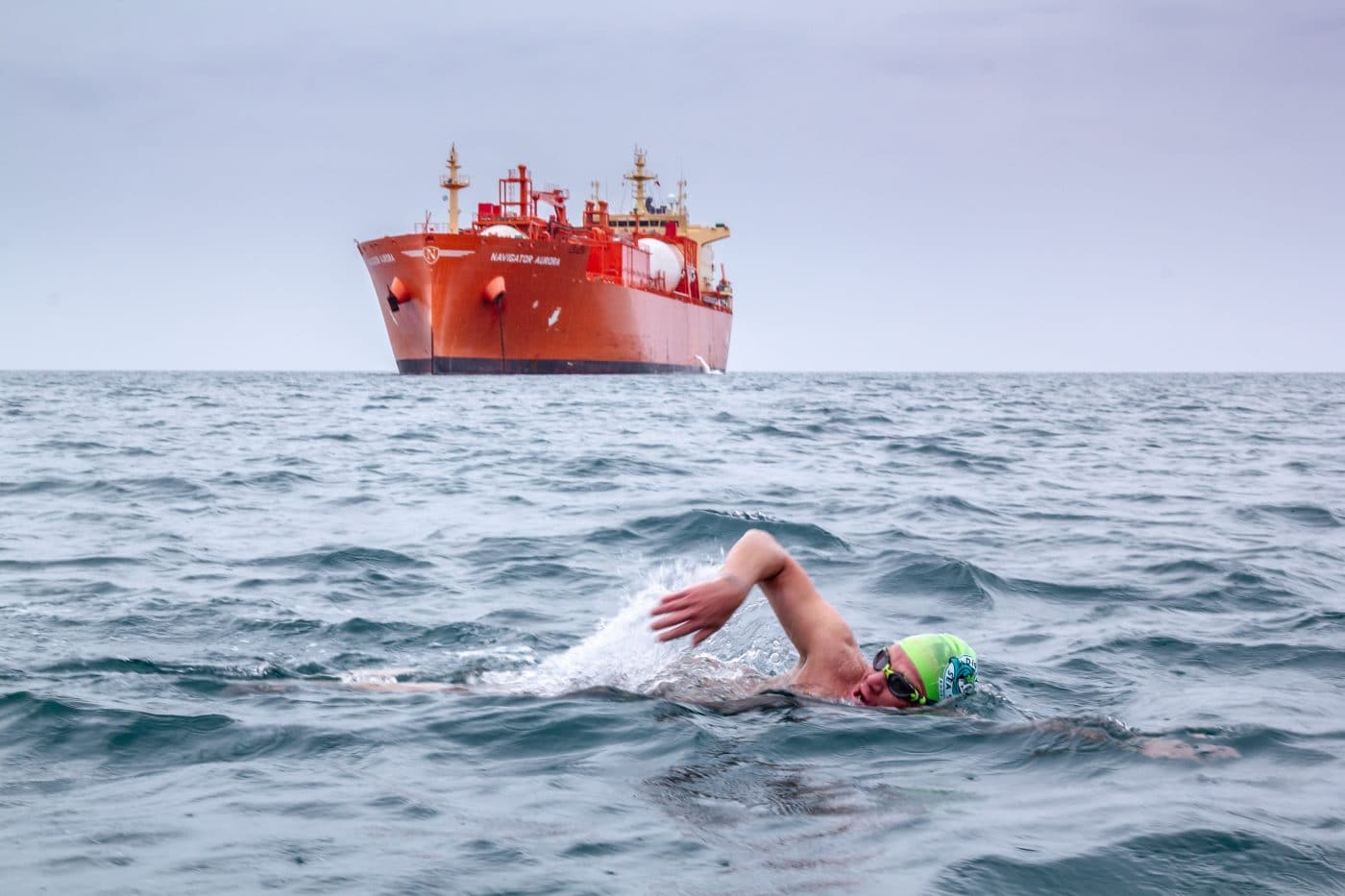 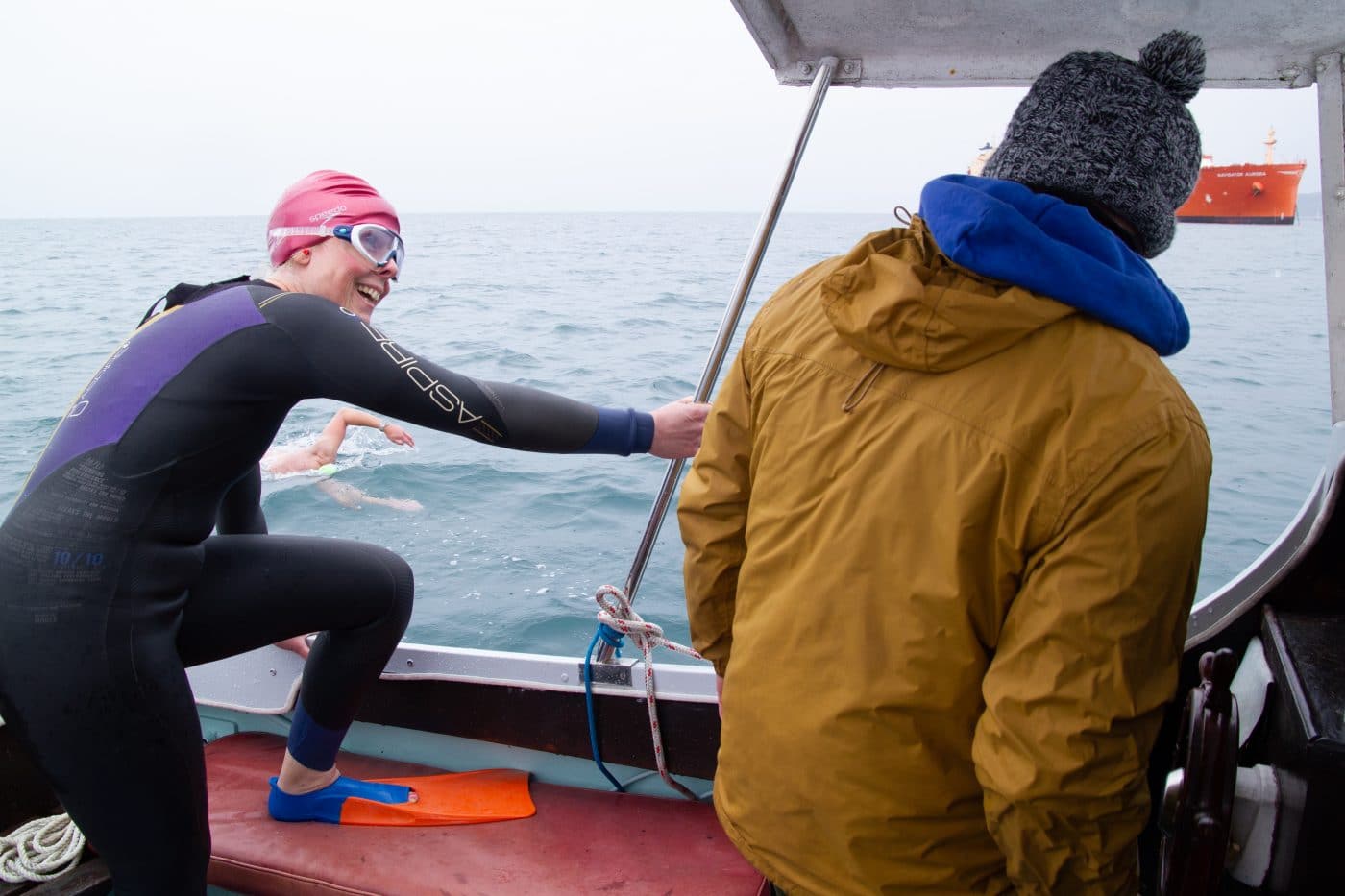 Many thanks to Marc who piloted the escort boat with help from Sarah and Becky, and thanks also to them for some fantastic photos.

1 thought on “Weymouth to Bat’s Head”